"FinTech Will Keep Changing Our World"

Many of you know that I graduated from college in the early ‘70s, went to work as an accountant for Price Waterhouse (PW) in Los Angeles in the midst of a long recession that was fueled by oil embargos, high unemployment, runaway inflation and the Vietnam war. Sound familiar? At the same time, commerce and finance were changing to adapt to new innovative technologies and business practices. Also, I received my first “green” American Express card and thought I had “made it” as I entered the mysterious business world of large public companies and high finance as a new CPA.   Nothing in my humble upbringing in Idaho and higher education in Utah had prepared me for what I would see in the “real-world”. Before long, new technologies involving monstrous computers and reams of dot-matrix paper seemingly made all financial calculating and reporting more efficient. And, when PW allowed its accountants to no longer rely on slide rules and “by-hand” calculations, a very large and very heavy calculator appeared on my desk with rows of numbered keys and buttons. I no longer had to do it “in my head”!

It was not long before I received a “Gold Card” and a brand-new BankAmericard.  The world of personal finance had instantly been changed forever! Soon a “personal computer” showed up in a big box and I threw out that heavy calculator. Upon my move to Durango in the early 80s, my CPA firm bought all the staff accountants and bookkeepers their own personal computer, loaded with VisiCalc and then Lotus 123 spreadsheet programs that were advertised as “better than sliced bread”. Not long thereafter, we had found the magic of tax return software applications that could be loaded on each individual computer; and away we went into the world of new technology; never to look back. Then, Microsoft appeared with its menu of applications that soon replaced the first generation of spreadsheets and Excel became (and still is) the business spreadsheet of first choice.  And my old BankAmericard was replaced with a Visa and Mastercard (accepted worldwide).

Then came the internet, with its speed, communication capabilities and eventual “vulnerability to hacking”. Now, many thousands of dollars later with many IT consultants speaking a computer language; everything based “in the cloud” for safekeeping and monthly fees that will go on forever. Well, you guessed it, we were “smart enough” to invest in all of the new technologies through a variety of diversified companies and our clients’ portfolios grew with all the new innovations. Not all of the new technologies proved worthy, but enough did that it paid off.

The world of FinTech (financial technology) is once again shooting forward as bright and inspired young entrepreneurs are now looking beyond the boundaries of traditional economic units (e.g.-countries) in search of new and secure ways of conducting business outside the limitations of central banks and traditional banking systems. Examples  of the “internet of money” including Digital lending and credit; Mobile banking; Mobile payments; Stock trading; and Blockchain. In that process, the world of Cryptocurrencies was born as an outgrowth of the blockchain. In addition to Bitcoin (born in the late 2000s), another fifty cryptocurrencies are being actively promoted as currency to own, buy and sell almost anything. I saw a demonstration of the “digital wallet” that was loaded up with bitcoin purchased for dollars from some exchange platform. The buyer then went to a coffee shop and bought a cup of coffee from his bitcoin wallet and the wallet magically then held fewer pieces of  bitcoin.  This most likely will mean the end of all those plastic credit cards!  Bitcoin has “traded” over the internet at a value of over $60,000 per coin; all outside the purview of any banking system. Also on the nightly news, many poor economies in Africa were turning to Bitcoin digital wallets as those countries do not have remote banks to handle all the daily transactions of life, although they do have internet access and smart phones. I am sure you have seen that Russia has been able to transact its oil business through Bitcoin transactions, thereby attempting to avoid the many international sanctions on its economy. 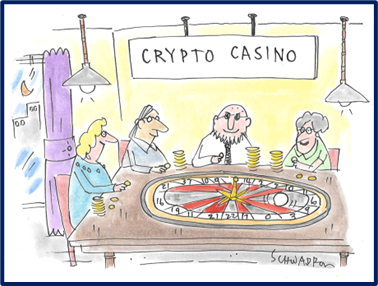 My purpose in telling this story is not just to inform you about the development of  technologies, but to also warn of the possibilities of its limitations and downfalls. Remember the Tulip Mania of the 17th Century when a single tulip bulb was somehow valued at more than the price of a house and the Dot.Gone period of the late 1990s when new companies with no sales history were trading at stratospheric valuations and soon became bankrupt. In both cases, people threw large amounts of their hard-earned money at “opportunity” believing they were “good investments”. Afterall, if someone is willing to pay the price, it must be worth it! Our view of cryptocurrencies is that they have no intrinsic value as the coins are not backed by anything tangible (unlike gold, silver and other precious metals) or the “full faith and credit” of a government (like the US Dollar). Watching the business news as part of managing your portfolio, we see the daily fluctuations in the value of Bitcoin (and other cryptos). I recently saw that the value of one Bitcoin had fluctuated from a high of roughly $60,000 per coin to a low of roughly $30,000 per coin and is now trading in the $40,000 range. I also see that the value does, in fact, go up and down dramatically much like the securities market (and hence not a hedge against a falling securities market, or a hedge against inflation). Our managed portfolio also goes up and down reflecting economic realities, but with much less volatility.

Who knows if Bitcoin will survive the current trend to “invest” in cryptocurrencies, or even be the crypto of choice in Blockchain? From our view (and that of the Central Bank, the IRS and the SEC) speculating in cryptos is gambling. Remember, the big winners are mostly the casinos, not the gamblers.  Although the coins are seemingly coming into the mainstream, our custodian, TD Ameritrade Institutional, does not trade or allow any cryptos to be held in client accounts.

Having said all that, we do believe that blockchain technology is the future of global and local economic commerce. There is still a long way to go to ensure the privacy and security of the systems, as there is no FDIC insurance if your digital wallet is lost or stolen. Just recently I saw that “super computers” that house the blockchain were in fact hacked and are vulnerable to attack by the “bank robbers”. The sheer size of a super computer with the capacity to hold an account for every person on the planet is beyond my comprehension. Nevertheless, just as we have held investments in software innovators, cell phones, internet providers, and computer makers, we will continue to invest in future innovations. Those types of investments are currently undergoing a lot of selling by individual investors, afraid of rising interest rates, inflation and recession. Technology positions in our portfolio have therefore suffered from untethered selling. The competent managers of the funds holding new technologies (including the blockchain technologies) have proved in the past that the underlying companies do “have what it takes to survive” and we will therefore hold onto them for future gains (and possibly add to by “buying low”). In the meantime, those investments are dragging down the equity performance of the portfolio.

Our portfolio has not been immune to the broad valuation declines from the beginning of the year brought on by the fears of a recession driven by inflation, increasing interest rates and the war in Europe:

By looking at the differences in our returns from the broad market indices, you can see that the tactical moves we made this calendar year have paid off. Most recently, we have taken gains in several positions and reinvested the proceeds into our “Made in America” REIT positions that are warehouse and logistics based to profit from companies moving operations from international locations back to America to deal with the supply chain and security issues found in international locations. We have also added to the two “Stable-Value” term date funds that concentrate on real estate investments in the food chain and supply chain; as well as private equity ventures involving financing for unlisted companies involved primarily in innovative and futuristic enterprises (including FinTech).

Looking forward, we believe that 2022 will continue to be challenging as the issues discussed above are most likely to remain problematic until yearend; and most likely into 2023. In the meantime, the unrealized losses will affect our performance, even as the cash flows from dividends and interest continue at five percent, or better, rates.

Please contact either me or James if you have any questions. 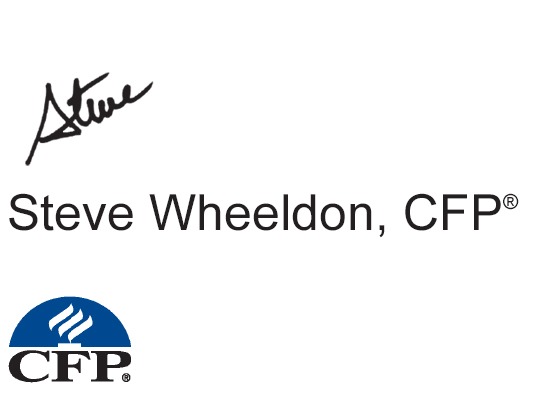